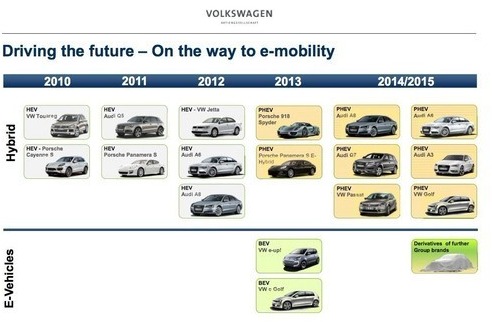 According to information presented by Hans Dieter PÃ¶tsch, a member of the Volkswagen Board of Directors, Volkswagen Group will launch more than 10 electric vehicles worldwide from 2013 to 2015, most of which will be plug-in hybrid vehicles (PHEVs).

As can be seen from the table, in 2013 Volkswagen will have 4 electric vehicles available, including Porsche 918 Spyder PHEV and Porsche Panamera SE-Hybrid PHEV. Two plug-in hybrids and e-Up! BEV and e-Golf BEV Pure electric car.

Of the 10 electric vehicles that were exposed this time, plug-in hybrid vehicles accounted for 8 models. It seems that the Volkswagen Group has already adopted plug-in hybrid technology as the main route for the development of new energy in the future. Volkswagen CEO Wen Deen also said: "In the next few years, we will electrify all levels of products through plug-in hybrids and help the electric propulsion system achieve breakthroughs."

Previous: Heavy rains have caused the emergency transfer of more than 700,000 people in Jiangxi Province

Next: China Automotive Systems will supply steering components for SAIC-GM-Wuling